German handball photographer Michael Heuberger has died at the age of 75 after a serious illness.

Heuberger was one of the pioneers of handball photography, first in the good old days when films were still being developed right in the arenas, and later in digital photography when a mass market opened up. He was known in all handball arenas worldwide as a valued and always friendly, helpful colleague.

Heuberger's last major tournament was the 2019 IHF Men's World Championship in Germany and Denmark. From 1994 to 2016 he was a photographer at all 24 Men's and Women's EHF EUROs, working for many media including the EHF. He also shot both world championships and Olympic Games for the IHF.

Heuberger was just as fond of photographing youth tournaments. If at some point a picture from the younger days of a world star was needed, he certainly had one in his huge archive.

Heuberger came to photography by accident. Originally the man with the distinctive beard worked as a re-toucher for a large publishing house, he got his master's certificate. Later he reduced his work and made his hobby of sports photography his second, and later his only, job.

In addition to handball, his great love was the SC Freiburg football club, but he was also involved in ski jumping and other sports. Heuberger traveled to four continents and more than 50 countries as a sports photographer.

In the book on 25 years of EHF in 2016, Heuberger reported on his early days.

“I knew how to work on pictures and graphics, but had been an amateur in photography. My ‘handball career’ had started at our local clubs TuS Schutterwald and TuS Hofweier. Due to my profession but also due to my own little technical inventions, I had the opportunity to process films on my own and thus was asked by several newspapers to work for them as a sports photographer. This was the start of my international career,” he wrote.

In a time when film needed to be processed in darkrooms, Heuberger was already one of the best. And when digital photography began, he switched easily to the new technology. The number of photographers rose rapidly, but Heuberger was still there. As a member of the handball commission of the International Sports Press Association, Heuberger was constantly seeking to improve the working conditions for photographers at major events – another trailblazing part of his life. 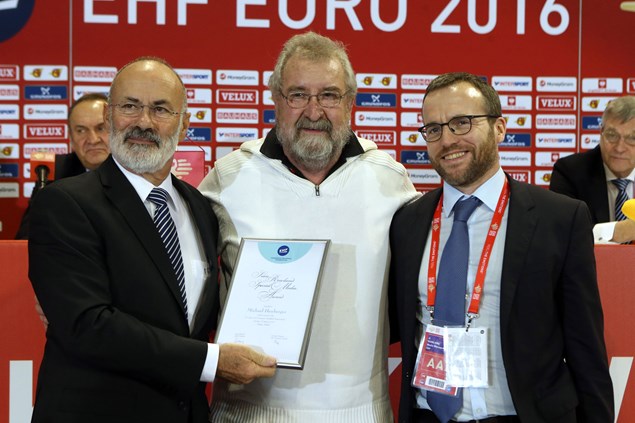 In the last 10 years, Heuberger received two very special awards. In 2011, a picture of Norwegian star player Heidi Løke was awarded best handball photo of the year by the IHF, and in 2016, Heuberger received the “Sian Rowland Special Media Award” by the EHF, in commemoration of the first head of EHF Media, Sian Rowland, with whom Heuberger worked for many years.

“I never expected to receive this award, as I am a photographer,” he said after the ceremony on the fringes of the final weekend of the Men’s EHF EURO in Poland.

Some months later, he turned 70 - and still had hopes and dreams, but then became seriously ill. After a five-year struggle, Heuberger died on Monday 13 September 2022, three weeks before his 76th birthday. He leaves behind his wife Doris, who has been married to him for 56 years, a son, a daughter and three grandchildren.

The EHF, the whole handball and media family convey their sincere condolences to the family of an enthusiast for handball and photography.

DAY REVIEW: The new wheelchair handball title holders had a clean record after beating the Netherlands in the final

REVIEW: We have reached the mid-way point of the IHF Superglobe 2022 in Jeddah and the semi-finals with three of the four teams coming from…

PREVIEW: Magdeburg, Barça, Kielce and Benfica are among the 12 teams, which duel in Saudi Arabia from Tuesday