Málaga hope for goals and record crowd in final

Rocasa Gran Canaria, the two-time EHF Challenge Cup winners, made a step towards winning the EHF European Cup Women 2021/22 last week, when they defeated Costa del Sol Málaga 21:17 in the first leg of the all-Spanish final.

The defending champions from Málaga will be eager to turn the tide when hosting the decisive leg on home court on Saturday evening.

And they hope to do so while setting a new attendance record for a women’s handball game in Spain. 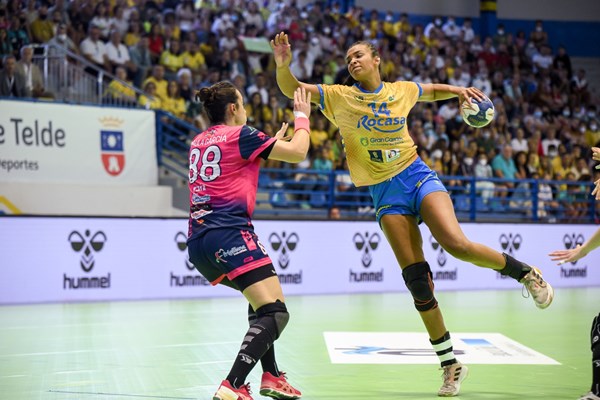 Playing at home, Málaga’s goal is not only to make up the four-goal defeat from last week, but also to set a new attendance record for a women's handball match in Spain.

In March, Spain’s national team faced Hungary in Santander in front of 5,000 spectators, but on Saturday, Málaga will host Gran Canaria at the José María Martín Carpena Palacio de los Deportes and hope to pass the milestone and set a new best mark – not just for women’s handball in Spain but for the EHF European Cup Women as well.

FINAL REVIEW: Gran Canaria took a step towards winning the trophy, beating Malaga by four goals in the Spanish derby

All-Spanish final throws off in Telde

Pavlovic and Gran Canaria dream of a trophy

FEATURE: Pavlovic has had a big season so far having reached a European cup final and picking up international caps

FEATURE: The Brazilian right wing and her club face fellow Spanish side Gran Canaria in the EHF European Cup final on Sunday

Malaga close in on final after big home win

SEMI-FINAL REVIEW: The title holders took a huge step towards the final, while fellow Spanish side Rocasa lost by one goal against Lviv

ROUND REVIEW: The title holders from Spain progressed to the next stage after beating Vestmannaeyjar twice