Lemgo set to face La Rioja in opening round

The first leg of the qualification round 1 ties in the EHF European League will take place on 27/28 August, followed by the second leg on 3/4 September 2022.

All-Norwegian clash between Kolstad and Drammen

While the tie between La Rioja and Lemgo features two clubs with a long history of playing in European club competitions, the Norwegian derby in qualification round 1 between Kolstad and Drammen will also capture the attention of European handball fans.

Kolstad have only made one previous appearance in a European Cup competition, but they have lofty goals for the future and have added Torbjørn Bergerud and Magnus Gullerud to their squad for the upcoming season. Meanwhile, Drammen, who reached the semi-finals of the EHF European Cup Men in 2021/22, will make their first appearance in a qualification round of Europe's second-tier competition since they lost to THW Kiel in the EHF Cup in 2018/19.

Fellow Scandinavian sides IFK Kristianstad, IK Sävehof and Bjerringbro-Silkeborg will face clubs that have plenty of European experience. IFK Kristianstad will meet Slovenian club Trimo Trebnje, who played in the EHF European League group phase in 2020/21, while fellow Swedish side IK Sävehof will take on former Challenge Cup finalists AHC Potaissa Turda from Romania. Denmark's Bjerringbro-Silkeborg arguably have a tougher test against Rebi Balonmano Cuenca, who qualified for the group phase of the EHF Cup in 2018/19 and 2019/20.

Flensburg, Bidasoa Irun and Montpellier await in round 2

Defending champions SL Benfica and 2020/21 runners-up Füchse Berlin are among the 12 clubs that will enter the competition in the group phase. The group phase, which will feature 24 teams, will begin on 25 October 2022 and will conclude with the 10th round on 28 February 2023. 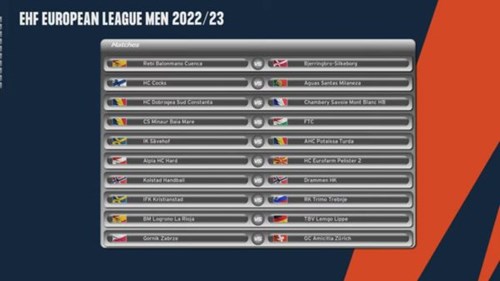 Previous Article Quintus and Vestmannaeyjar face Greek opponents in round 2