EHF’s Respect Your Talent programme continues this week at the various YAC tournaments, with Croatia’s former Olympic and world champion Ivano Balic set to work with the talents named ‘Player of the Match’ at the Men’s 18 EHF EURO 2022 in Montenegro.

While most handball players are preparing in August for the new season, Europe’s best under-18 talents are representing their countries at various YAC events across Europe.

Showing their skills and talent on the court, those who are awarded ‘Player of the Match’ get the opportunity to participate in EHF’s Respect Your Talent (RYT) programme, promoting a holistic development of talented players’ careers – on and off the court.

The Men’s 18 EHF Championships 2022 are visited by Stefan Lövgren (in Riga), Luka Zvizej (in Craiova), and Rastko Stojkovic (in Tel Aviv), while the M18 EHF EURO 2022 in Podgorica is the domain of a new RYT ambassador: Croatia great Ivano Balic – similar to the M20 EHF EURO and Championships last month, when Victor Tomas, Carlos Prieto and Rastko Stojkovic were in action.

Balic – an Olympic gold medallist, world champion, IHF World Player of the Year, EHF EURO and EHF Champions League star – ended his playing career in 2015. He has since dedicated himself to working with young players. 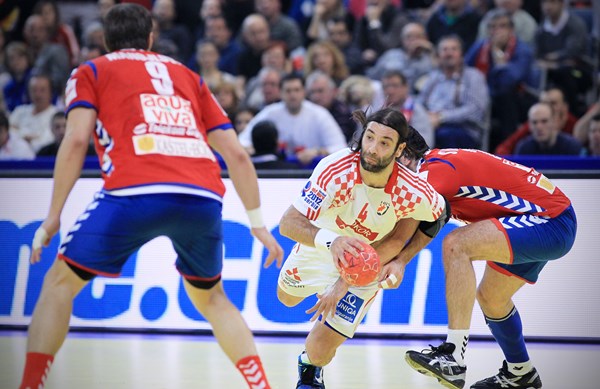 Balic felt like this was his duty, and no wonder that he has been happy to join the RYT programme as an ambassador, with his first mentoring session taking place in Montenegro on Thursday.

“For me, working with young players is the best aspect of working as a coach. To me, it is a duty of experienced players, who played in many clubs, trained under different coaches, saw different approaches to handball, to pass on that knowledge to a young generation,” Balic says.

“Being a coach is hard work but when you can see everyday progress with those kids, that gives you additional motivation.”

RYT was launched in 2019 and the programme has since written many successful stories. A bunch of players who benefited from the programme are now shining on the big stage, having taken with them all the advice they gathered as RYT participants.

Balic believes it is important to transfer especially his off-court skills.

“I think this program is very good for young players. They could benefit a lot from it. We can prepare them for things from many different fields that we had to learn on our own, from our own mistakes,” the former centre back says.

“If you were lucky, you could learn from some older players in your club. But I hope that many young players will now use this platform to be wiser in their career.”

For me, it is a duty of experienced players who played in many clubs, trained under different coaches, saw different approaches to handball, to pass on that knowledge to a young generation.
Ivano Balic
Respect Your Talent Ambassador

The EHF is working on a new app, which will provide players with tips and tricks on different topics, such as anti-doping, mental fitness, sports law, media training, and dual career.

On some of those topics, Balic shares his insight and tells the story from when he started playing in Split until showing off his magic across the world and winning medals with Croatia.

“During the programme they are learning about talent, on-court and off-court topics. They have what it takes to play and their talent leads them on the court,” Balic says.

“So, we focus on off-court topics as there can be many obstacles they can run into. Agents, media relations, mental fitness, those are just some of the topics I like to talk about. I like to transfer my knowledge about things I had to learn on my own. It is good they have us, the ambassadors, to ease the path for them.”

Balic recalls how he missed similar guidance in the early years of his own career.

“When I was young, we didn’t have this. I had to ask older players and I was doing it daily. I was really persistent with my questions, listening to their stories, taking in advice. I was lucky enough I had few of them who were there for me during that period,” Balic says.

And it is not only the young players learning from the big stars – handball greats can also learn something from the young generation.

“Yes, they have taught me how to be patient,” Balic says. “You have to learn how to approach them, repeat things, not being boring, and make them take in the knowledge with a smile on their face.”

FEATURE: 11 participants in the Respect Your Talent 2021 programme have featured at the Women's European Championship

FEATURE: Respect Your Talent ambassador Víctor Tomás shines his light on the young stars of the Machineseeker EHF Champions League

Talents enjoy summer of inspiration at Respect Your Talent e…

FEATURE: Over 30 players attended the Respect Your Talent workshop in Gaia on Thursday, learning from the best how to improve their careers

Tomas teaches what makes a great player for RYT

FEATURE: With ambassador Victor Tomas, the Player of the Match award recipients at the M20 EHF EURO 2022 improved their skills on Thursday