“Feeling at home can be difference between winning and losing”

The 2021/22 season has not gone entirely as planned for SCM Ramnicu Valcea. An underwhelming start in the domestic league meant that coach Goran Kurtes was replaced by Bent Dahl, with the results improving immediately.

Dahl also supervised the double header in the last qualification round of the EHF European League Women against Super Amara Bera Bera, which Valcea dominated for a 63:55 aggregate win.

While the group phase included powerful opponents like Viborg HK, Valcea finished second and progressed to the quarter-finals, where another Danish powerhouse awaits: Herning-Ikast Håndbold, with the first leg scheduled for Sunday 27 March (live on EHFTV at 14:00 CEST).

Herning-Ikast will be favoured, especially as they host the second leg of the doubleheader, yet Valcea will be definitely trying to spring a surprise against the EHF Finals contenders from last season.

For that to happen, the Romanian side will need a big game from line player Asma Elghaoui, one of the longest tenured players in the team. Only centre back Iryna Glibko and left wing Cristina Florica, who is out due to an injury, have been playing for Valcea longer than the Tunisian-born line player.

“These were three amazing years. I did not know what to expect when I joined the team after playing a few years in Hungary, but everybody received me with the arms wide open and the feeling was amazing,” Elghaoui said.

“There have been plenty of good moments, some bad ones too, but I really think I found the right place to develop and to be as good as I can.”

Elghaoui played in the EHF Champions League for two seasons with Valcea and won the Romanian league title, cup and Supercup over the last three seasons.

With plenty of players coming and going over the past few seasons, Valcea have remained one of the top Romanian teams and Elghaoui has been a huge part of that

The line player scored 50 goals in her first season in the EHF Champions League, when she was voted the All-star line player; 42 in the second one; and 39 over the last eight games in the EHF European League this season.

26 of them came at home, in the Sala Traian, one of the loudest handball arenas in Europe, a place where Valcea rely on their die-hard fans to make it as difficult as they can for the opponents.

It did not work three seasons ago, when Valcea met Herning-Ikast Handbold in EHC Cup qualification. The Danish side took a convincing 43:35 aggregate win, with a masterclass defensive performance.

Will it be different this time around?

“Having played against Viborg in the group phase could be an advantage for us, because they are a good Danish team, one of the best in their league. We learnt plenty in the two games we had against them, including in the painful loss in Denmark,” Elghaoui said.

“However, I think that Herning-Ikast are a bit different. While keeping the basics of Scandinavian handball, with good defence and efficient fast breaks, they look different a bit in defence.” 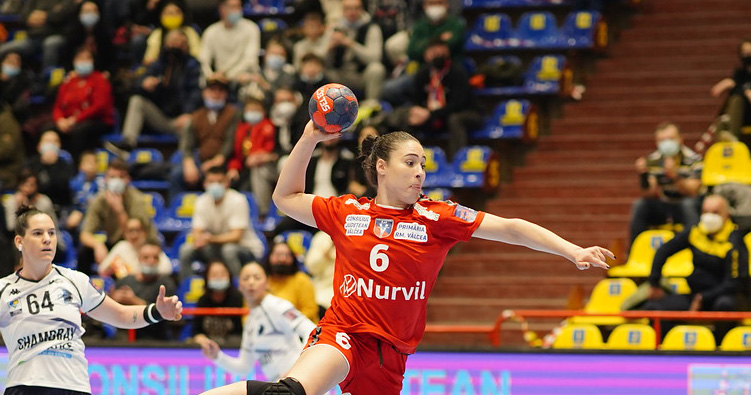 Having played against Viborg in the group phase could be an advantage for us. However, I think that Herning-Ikast are a bit different. While keeping the basics of Scandinavian handball, with good defence and efficient fast breaks, they look different a bit in defence.
Esma Alghaoui
SCM Ramnicu Valcea line player

An EHF Finals Women berth would be an amazing feature for Valcea, which struggled to be back in the top tier of European handball after Oltchim’s demise in 2013.

The Romanian side reached the knockout phase of the EHF Champions League in the last two seasons, but could hardly contend for a piece of silverware, like they did between 2007 and 2015.

But with a good structure in place, a charismatic coach and strong players coming in this summer, this season could be a huge building block in terms of confidence and chemistry.

However, everything starts with the basics. Players cannot fulfil their potential without feeling good, feeling like they belong in a place.

Elghaoui, who was born in Tunisia and represented the African team between 2009 and 2016, arrived in Europe in 2013. After a season at Nimes and one with Dinamo Sinara in Russia, she spent the next four in Hungary, plying her trade for Györi Audi ETO KC and Siófok KC.

Her signing for Valcea proved to be an excellent decision, both on and off the court.

“I fell in love with the city immediately after I joined the team. The people are so passionate, so full of life, always smiling, trying to help whenever I need something. I feel like we are a bit cut from the same cloth, Tunisians and Romanians,” Elghaoui said.

“Both myself and my husband settled in excellently. While the city may be small, it is full of life. And the best thing about it? I feel like the Sala Traian is my home. And sometimes that can be the difference between a win and a loss; the energy is amazing.”