While memories of the spectacular EHF FINAL4 2022 events in Budapest and Cologne are still fresh, the EHF Champions League will take an important step towards the new season on Friday with the draw for the men’s and women’s 2022/23 group phase

All is set for the group phase draw on Friday – and, led by the defending champions Barça and Vipers Kristiansand, 32 European top clubs cannot wait to find out who they are going to play in the EHF Champions League 2022/23.

Following the same competition format, both the men’s and women’s field consists of 16 teams, which will be divided into two groups of eight.

The draw takes place in Vienna on Friday 1 July at 11:00 CEST and will be streamed live on EHFTV, the Home of Handball YouTube channel, and the EHF Champions League Facebook page, with further coverage on EHF’s dedicated social media channels Twitter and Instagram as well as on eurohandball.com.

Geo-restrictions may apply to the streaming on EHFTV, YouTube and Facebook, as the following broadcasters are transmitting the draw live as well:

How the group phase draw works

Prior to Friday’s draw, the 16 teams in each competition have been divided over four pots: 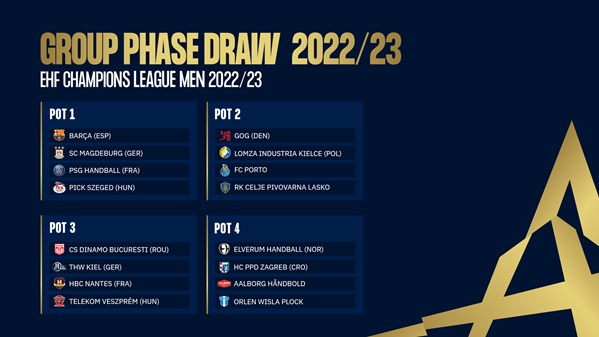 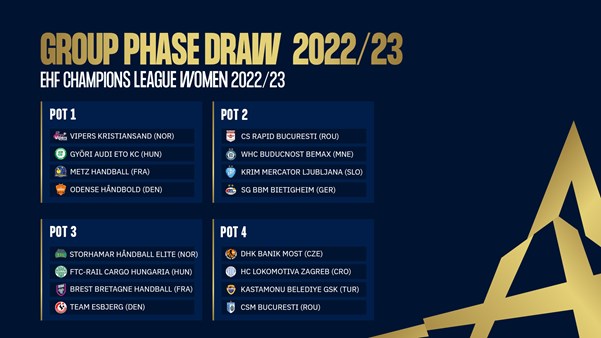 The EHF Champions League Women 2022/23 group phase starts on 10/11 September, the men’s group phase on 14/15 September, as both competitions stick to the same playing days as last season: the women on Saturday and Sunday; the men on Wednesday and Thursday.

The top-six ranked teams in each group will qualify for the knockout phase: both the group winners and runners-up head directly into the quarter-finals; the teams ranked third through sixth advance to the play-offs.

COUNTDOWN #9: FTC-Rail Cargo Hungaria (HUN). The Hungarian side start another attempt to reach the season highlight in Budapest

COUNTDOWN #10: Krim Mercator Ljubljana (SLO). The former two-time champions are ambitious after their 2021/22 run to the quarter-finals

“Europe will see who Rapid really are”

Czech champions making the Most of it

COUNTDOWN #12: DHK Banik Most (CZE). Most return after three seasons, facing a challenge with limited experience in the top tier

Second time the charm for Pascual and Dinamo?

COUNTDOWN #13: C.S. Dinamo Bucuresti (ROU). In the second season of the Xavi Pascual project, the Romanian side aim for the next step

Buducnost aim to get back on track

COUNTDOWN #14: Elverum Handball (NOR). After reaching the play-offs in the last two seasons, Elverum are ready for more

NEWS: The playing times for the first 10 rounds of the new season in the men’s top tier have been confirmed

COUNTDOWN #14: Storhamar Handball Elite (NOR). Storhamar are the only team to debut in the EHF Champions League Women this season