Although Nærbø IL won the first leg of the EHF European Cup Men 2021/22 final against CS Minaur Baia Mare 29:25 on home court last week, the tie is far from decided.

With a four-goal advantage, the Norwegian debutants hope to complete their fairy-tale season when the teams meet again on Saturday, while the more experienced Romanian side is looking for a comeback with the support of their home crowd. 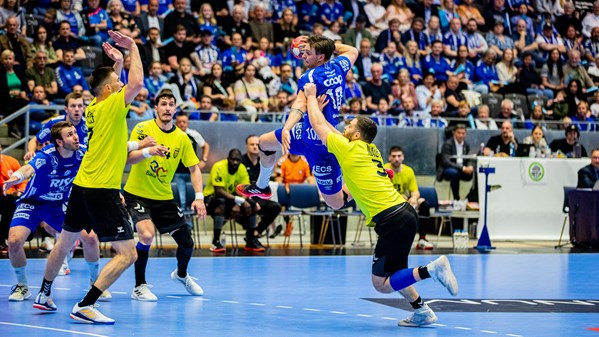 In order to turn the tide in the final, Baia Mare will have to rely on their strength in home matches once again. The Romanian side started the competition in round 1 and have won all six matches played at home. On the other hand, Nærbø have lost their last three away games in the EHF European Cup.

However, just winning will not be enough for Baia Mare on Saturday: they need to do it by at least five goals – or by four if they concede fewer than 25 goals.

Next Article Test your knowledge of the EHF Finals Men 2022

NEWS: Footage of both duels between Nærbø and Baia Mare to be broadcast throughout Europe – and beyond

FEATURE: A lifetime spent at Baia Mare could be the key for Calin Cabuț when CS Minaur host Nærbø in the second leg of the EHF European Cup…

FINAL PREVIEW: The surprise package from Norway hosts their experienced opponents from Romania in the first leg on Saturday

NEWS: The title will be decided in Romania on the weekend of 28/29 May

Quintus and Vestmannaeyjar face Greek opponents in round 2

NEWS: 27 ties were drawn in round 2 of the EHF European Cup Women 2022/23 at Tuesday's big draw event in Vienna

NEWS: Raimond Sassari and SSV Brixen will meet when round 1 of the EHF European Cup Men begins on 10/11 September 2022

118 balls to be opened at Tuesday's draw event

PREVIEW: A big draw event for the 2022/23 club season will take place on Tuesday 19 July at the EHF Office in Vienna

FEATURE: Coach Heine Jensen, who led Nærbø to the EHF European Cup final in their debut European season, did not imagine such a success