Skip to content Skip to navigation
My Profile Logout
RYT
News
Which talents will break through in 2022/23?

Over the summer, plenty of young talent has been on display during the Men’s 20 and Men’s 18 EHF EURO tournaments as well as in the various EHF Championships. The tournaments have become a hotbed for talented young players to make their mark in handball, improving their credentials in tough battles against likeminded opponents.

In the past, players like Alex Dujshebaev, Dika Mem, Blaz Janc, Daniel Dujshebaev or Rui Silva have made the M20 EHF EURO All-star Team, their last younger age category (YAC) tournament before transitioning to the big leagues.

So, who are the players that shined this summer and could very well make their mark in the Machineseeker EHF Champions League 2022/23, which starts this week?

There are plenty of players in that category and to get a full picture of what is going to come, we asked Respect Your Talent ambassador Víctor Tomás.

The former Barça captain was present on site in Portugal for the M20 EHF EURO and led a workshop with all the talents that received a Player of the Match award that event.

Tomás on Stefan Dodic (Zagreb): “He has a special maturity”

Probably no better player to start with than Stefan Dodic, Serbia’s centre back, who was named the tournament’s MVP and who will play in the Machineseeker EHF Champions League 2022/23 for HC PPD Zagreb.

“He is a really outstanding player in attack. Has a special vision for handball, sees the game superbly. For a player his age, he has a special maturity, he is ready to take it to the next level,” Tomás says.

“He is a true centre back, a player who can deliver good passes or strong shots, has a certain nous and understands the rhythm the game should be played at. The only issue, which we will see in plenty of others players, is that he needs to work on defence.”

Dodic, who is at Zagreb on loan from Lomza Industria Kielce, has plenty of time to grow and will reap the benefits of being a prime option for the Croatian side. Getting more and more minutes in the European premium competition will work wonders for a player who is already projecting as a special talent.

It is a big challenge, sure. Handball is also about experience, and one can get it only by playing more and more. So, it is tough at first, but you get the gist and then get better and better.
Víctor Tomás
Respect Your Talent ambassador & former Barça captain

Tomás on Andre Sousa (Porto): “He knows the game inside out”

Portugal have been the big surprise at the M20 EHF EURO they hosted, displaying a well-rehearsed game plan and providing a generation which will likely go far in the senior game.

However, the two brothers that have dazzled this season, Francisco and Martim Mota da Costa, are still at Sporting CP, and therefore will not play in the Machineseeker EHF Champions League.

Yet, 20-year-old centre back Andre Sousa will probably make his debut for FC Porto, after being on loan at Aguas Santas Milaneza, where he EHF European League qualification last season.

Sousa, who scored 30 goals during the M20 EHF EURO, is another special talent which can influence a game on his own and, slotted into the back line, will just enhance Porto’s game.

“He is brilliant. He knows the game inside out, he has a very good brain for handball, understands the game, can dictate the rhythm in attack. He knows how to choose whatever suits best that play,” says Tomás.

“His only issue? I will say it again: become better in defence. But it really comes with age and experience, because only working side by side with your teammates will help you grow.”

Handball seems to run in the veins of the Janc family, therefore it was no surprise to see Mitja follow into the footsteps of his older brother, Blaz, who is now playing for Barça.

At 19, Mitja Janc is already an established name in handball, being named MVP of the M19 EHF EURO 2021, where Slovenia secured the gold medal, and becoming the third best scorer at the M20 EHF EURO 2022, with 47 goals – 11 behind leader Francisco Mota da Costa.

Janc will make his debut for RK Celje Pivovarna Lasko, the same team which kickstarted the career of brother Blaz.

“A very strong player for his age, very difficult to stop when playing one-on-one against him. He is a force of nature at times, very strong, especially at his age. It will be more difficult for him in the Champions League, but he will thrive if his team helps him by creating good situations,” adds Tomás.

Tomás on Péter Lukács: “Can play different roles in the back line”

Another player who has plenty of potential is Veszprém’s Péter Lukács, who has already made his debut at the highest level last season, when he scored four goals, including one at the EHF FINAL4 2022.

Lukács was Hungary’s best scorer at the M20 EHF EURO 2022 with 35 goals as his team finished fifth. 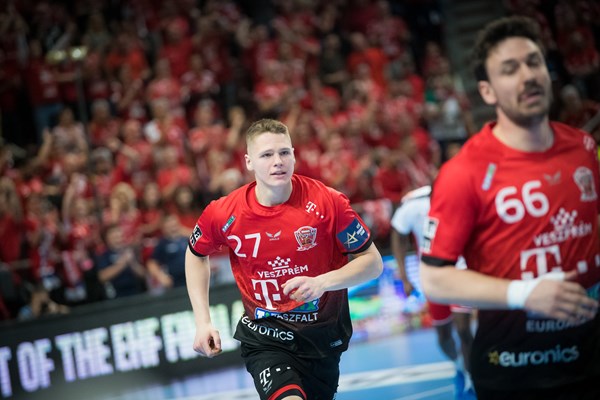 “He can play different roles in the back line, which is always a plus and can help the team in difficult moments,” says Tomás.

“He can also defend, a feature that is paramount in modern handball, because the transition between attack and defence is even faster. Can be a very good player in the future.”

Tomás on Reguart & Domenech (Barça): “They are great talents”

Speaking of Tomás former club Barça, the Spanish team surely has a stacked roster with plenty of stars trying to win the EHF Champions League for the third time in a row.

But they are still ushering new domestic talent in, as two European champions – Roberto Domenech and Bruno Reguart – have been added to the senior squad for this season.

Both were in the team that secured the gold medal at the M20 EHF EURO 2022, with Spain clinching the title after a hard-fought, high-octane game against hosts Portugal.

“Sure, they are great talents. Reguart has something from Dodic, is a very complete player, can dictate the rhythm and score whenever the team needs it,” Tomás says.

“Domenech is not a very tall goalkeeper, but he is very aggressive. When he is in the zone, he is sometimes impossible to beat. Just needs to display more consistency at times.”

Tomás himself made his EHF Champions League debut in the 2003/04 season at age 18, so he knows how to tackle the challenge.

“It is a big challenge, sure. Handball is also about experience, and one can get it only by playing more and more,” the former Barça captain says.

“So, it is tough at first, but you get the gist and then get better and better.”

Next Article Can Barça make it three in a row?

GROUP A REVIEW: Bietigheim were held to a draw at home after a late fightback from the French side

MOTW REVIEW: The Romanian powerhouse claimed another episode of their big rivalry against FTC, 30:24, thanks to a 13-goal outing from Cristi…

GROUP B REVIEW: The injury-depleted Hungarian club managed to overcome Rapid Bucuresti for their sixth victory this season

Metz take the spoils against Kastamonu

GROUP B REVIEW: The French team claimed second position in group B with a win over Kastamonu

GROUP A REVIEW: There was nothing DHK Banik Most could do against champions Vipers Kristiansand, as the Norwegian champions secured a clear…

GROUP B REVIEW: Even though Esbjerg travelled to Croatia with only 12 players, they easily won as Lokomotiva could not keep up with opponent…

LIVE BLOG: Continuing coverage of this weekend's matches from round 7 of the EHF Champions League Women group phase 2022/23

Arntzen: "Winning the EHF EURO is a boost for motivation"

FEATURE: After claiming her fourth EHF EURO title with Norway, Emilie Hegh Arntzen will return to top-flight action on Sunday for CSM Bucure…